Are We Making Any Progress?

I woke up at three A. M. praying that no one would molest her at church camp.


I have written about this before. I thought once I admitted it to myself and others I would be fine. Then I woke to this early morning prayer. My great-niece left for a week at church camp the day before. I am exited for her. Church camp was a very special part of growing up. My last year as a camper the director of the camp grabber me between my legs much as the current inhabitant of the White House brags about doing to women.

I have received many comments and questions about the cover of my book, Prostitutes, Virgins and Mothers: Questioning Teachings About Biblical Women. 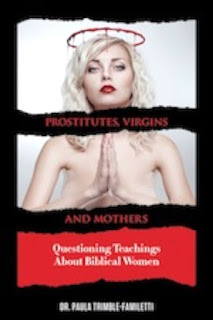 I
I gave answers like, "Women have been hurt by patriarchal interpretations of women's biblical stories. The woman on the cover represents the pain I have seen in my own eyes after a particularly harsh chastisement of women based on patriarchal interpretations." I gave an answer like that to  Marg Herder, a woman I greatly respect and the Director of Public Information for the Evangelical Ecumenical Women's Caucus: Christian Feminism Today. She was writing a review of my book for the EEWC web page. The review can be found at this link. https://eewc.com/prostitutes-virgins-mothers-questioning-teachings-biblical-women/

After that correspondence with Marg I went to the gym. It is a good thing that the weight was really heavy and the music was really loud because I burst into tears. Not just tears, but the ugly cry. The flood of memory and emotion surrounding the grabbing incident and what followed, overwhelmed me. That was the first time I wrote or even talked about the experience. First to Marg, then on this blog.

Almost 50 years later and I am praying for the safety of a fourteen-year-old girl at church camp. Almost 50 years later and the occupant of the White House brags about grabbing women's private parts. When I asked Marg if I could use her name in this blog she told me of a therapist friend who has seen an increase of women with PTSD because of experiences like mine. Having a man in the White House, who brags about molesting women has brought all those long buried feelings to the surface.
I am a Christian Feminist and I pray no one molests her or any other little girl or woman.