"If a man come upon a maiden that is not betrothed, takes her and has relations with her, and their deed is discovered, the man who had relations with her shall pay the girl's father fifty silver shekels and take her as his wife, because he has deflowered her. Moreover, he may not divorce her as long as he lives."
Deuteronomy 23:29 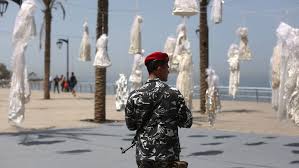 This art exhibit was created by Mirelle Honein to protest a law in Lebanon which, "allows rapist to avoid jail terms if they marry their victims." John, Tara; Time Magazine: May 15, 2017.  The exhibit features wedding dresses hanging by nooses. In April the cabinet of Lebanon revoked the law and  Parliament is scheduled to vote on it in May.
What kind of horror would that be for a women to have to marry a man who has so horribly violated her? After a 16-year-old girl committed suicide when she was forced to marry her rapist the law was overturned in Morocco. According to the Time Magazine article referenced above, at least six countries in the region, "retail the loophole."

And now in Manchester, England

"Women should adorn themselves with proper conduct, with modesty and self-control, not with braided hairstyles and gold ornaments, or pearls, or expensive clothes, but rather, as befits women who profess reverence for God, with good deeds."
1 Timothy 2:9-11 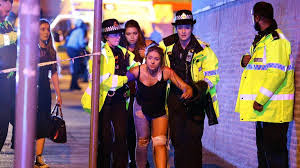 Under Taliban rule women may not go out of the house without a male family member to escort them. They must be covered from head to toe, their shoes must not make noise, their laughter must not be heard. The moment I heard of the bombing at the Ariana Grande concert I believed those young women and girls were targeted because they were not controlled by a man, they were not covered from head to toe and they were not silent. Ariana's concert tour is called, "Dangerous Woman Tour." These young women and girls are dangerous to the men who want to control their lives, their bodies and their reproductive abilities.

As a Christian I have experienced patriarchal interpretations of the Bible that are used to control and subordinate women and girls. I will not critique the Koran because it is not my holy book. I will critique the inhuman results of patriarchal interpretations of holy books which harm, seeks to control, subordinates or marginalize women. I will not be controlled!! I am a dangerous woman!

Posted by Unknown at 4:01 PM No comments:

Who were the Apostles?

The April 23, 2017 bulletin of St. Joseph Catholic Church brings to mind that radio preacher.  It states, "Today we listen to the teachings of three apostles - Luke, Peter, and John - who remind us that even though we have not seen Christ, we nonetheless are filled with joy as we place our belief in his saving death and resurrection." I believe the implication is that these three men were friends and contemporaries of Jesus.  If a parishioner took the bulletin at face value, they would be deceived.

Luke is not recorded in any list of Apostles found in the Gospels. Some traditions say he was a doctor who traveled with Paul, others that he was a late second century Christian from Antioch. We know he was not an eyewitness to the life of Jesus because he tells his reader he is attempting to compile a narrative, "Just as those who were eyewitnesses." The approximative date for Luke's Gospel is between 80 - 130 C.E. That would mean the Gospel was written 50 -100 years after the crucifixion of Jesus.

Scholars believe that 1 Peter was written by a follower of Peter based on "language, content, style and theological development." An example of  this is the polished Greek in which the letter was composed and allusions to persecutions which date between 81- 96 C.E. Peter was an unlettered and probably illiterate Galilean fisherman martyred in Rome between 64 - 67 C.E. That would mean Peter was dead thirteen years before the persecutions started.  The date for 1 Peter is the same as the Gospel of Luke.

In the introduction to the Gospel of John, The New American Bible: St. Joseph Edition, a Catholic publication, states, "Other difficulties for any theory of eyewitness authorship of the Gospel in its present form are presented by its highly developed theology and by certain elements of its literary style." Scholars believe that this Gospel was written by a disciple of John between 90 - 120 C. E.

Scholars of the Roman Catholic Church know this.  The New American Bible for Catholics says of
1 Peter, "Some Modern scholars however, on the basis of a number of features that they consider incompatible with Petrine authenticity, regard the letter as the work of a later Christian writer." The introduction to the Gospel of John says, "Critical analysis makes it difficult to accept the idea that the Gospel as it now stands was written by one person." And of Luke, "The prologue to the Gospel makes it clear that Luke is not part of the first generation of Christians disciples but is himself dependent upon the traditions he received from those who were eyewitnesses and ministers of the word."


We did not see Christ and we are filled with joy.

Perhaps that is why the church bulletin reminds us of the joy of  believing without seeing. Whoever these ancient authors were, they did not know Jesus and are relying on the words of others for their writing. Does that disqualify them as Apostles? In the Greek Apostle means, "One who is sent." According to that definition these authors could be considered Apostles. Why does this matter? Because, we are being misled into believing that the authors of Luke, I Peter and John were eyewitnesses to the life and teaching of Jesus. Taught to believe something that is not true. Why do we believe what we believe? Because we read it on the front of the bulletin or hear a radio preacher tell us that is what we believe.

So what is the answer? If the authors of Luke, John and I Peter, are apostles, if Paul is an apostle, if Junia is an apostle then Mary Magdalene, the other Mary, Mary the mother of James, Salome, and Johanna are all apostles. They were eyewitnesses to the life, teaching and resurrection of Jesus and they were sent!
Why is this important? Because gender is so often used to deny women full participation in their faith communities and deny their importance in the development of the Christian Church.  Believing the authors of Luke, John, and 1Peter were contemporaries of Jesus is Biblical  illiteracy and a contributing factor to limits on the full participation of women.