Mankind I am Not!

I went to the movies the other day and saw the advertisement below.  I was angry, a car "made for mankind."  That leaves me out.  Then I read an interview by Greg Robinson in which he claimed the ad was meant to be "gender neutral."  WHAT!  Does he know what gender neutral means?  Is womankind gender neutral?  Of course not.  No more than mankind is gender neutral.

It is anachronistic to continue to use male generic language as if it is inclusive language.  It is not. My dictionary says, "Mankind, the human race; man taken collectively."  But Womankind is, "Women collectively." I am not women are not men. A change of language is in order.
Posted by Unknown at 3:52 PM No comments: 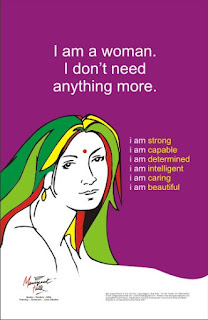 I am not a guy

or a dude or a kind of a man!  Cirque Du Soleil has a new show.  The TV advertisement proclaims it is the history of "mankind."  Enough!  It is not just his/story.  It is her/story too.  On a recent trip to Victoria's Secret I heard a young woman say, "dude, look at this bra."  I looked up to see a young woman talking to another young woman.  They have embraced their own erasure using male generic language.

If I approach a group of mixed gender and say, "Hi gals" are the male members of the group going to think I am talking to them?  Are they going to feel insulted because they have been greeted using female generic language.  Of course it is not generic and when mixed gender or single gender groups are referenced as guys or dudes or mankind the female gender is eclipsed.

Don't call me a guy!

References to femaleness continue to be used to insult men or boys.  You throw or walk or scream or whatever it may be, like a girl.  Watch the female pitchers in college softball.  Now that is throwing like a girl.  I am not a guy please don't call me one.

In 1963 President Kennedy signed the Equal Pay For Women Act.  That worked. 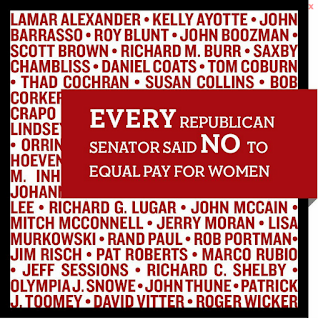 Posted by Unknown at 2:13 PM No comments:

Email ThisBlogThis!Share to TwitterShare to FacebookShare to Pinterest
Labels: Equal Pay for women, War on Women

Why Do We Need Christian Feminists?

Why We Need Christian Feminists

What male church leaders have had to say about women is truly disturbing.  What some of them say about Feminist is equally disturbing.  In his sermon, New Age Gnostic Feminist and Their Influence on the Church John McArthur informs women that they are confused about their God given roll in the church.  He couples this with a picture of four smiling women from the cover of  Gospel Today
titled, Women Pastors.  He also describes The Center for Research on Women, at Wellesley College as a"deadly think tank" and displays a picture of Hillary Rodham Clinton in a Nazi uniform with a Hitler mustache.  Displaying a picture of Sarah Palin he says, "Even Christian are falling under the spell of the feminist."  I have a feeling Sara doesn't think so, but I don't know for sure.

I am a Christian Feminist

I am a Christian Feminist because I came to my Feminism through my faith.  I do not believe in a God who discriminates based on gender, ethnicity, sexual orientation or anything else. In her book, In Memory of  Her Elisabeth Schussler Fiorenza describes Jesus and His Discipleship of Equals.  I believe in a baptism which erases any form of inequality between male and female.  I believe in beautiful, brilliant women, created in the image and likeness of their creator and not confused about their "God given roll."

Email ThisBlogThis!Share to TwitterShare to FacebookShare to Pinterest
Labels: Bible, Biblical Literacy, Biblical Women, Christian Feminist, In Memory of Her, Ordination of Women, Women in Ministry

Did God Create Men to be the "Bread Winner?"

And other antiquated questions.

Women work!  Women work inside the home for no salary, no insurance, no retirement.  Women work outside the home to feed and shelter themselves and their children.  Many work at jobs that are fulfilling and enjoyable.  Many women work more than one job for minimum wage.  Let's be clear, these men are disturbed because women are working outside the home for a salary and other benefits, not that women are working.  It is difficult to control women who can pay their own way.  The "biblical" argument that God intended men to be the bread winners based on Genesis 3:17-19 is curious considering the occupations of these men.  They are not, after all eating from their personal toil raising food by the sweat of their faces.